After graduating from the Parson School of Design in 2003, Julien David successively worked for Narciso Rodriguez and Ralph Lauren. In 2008, he launched his own label in Japan, named Julien David, since then he has been showing during the Paris Fashion Week.

“I feel very honored to be part of the fellowship winners’ list of the prestigious ANDAM Grand Prix and to get closer to the French industry for the development of my future collections” said Julien David after winning ANDAM.

His Spring-Summer 2013 collection is named « Les enfants Gatés » or « spoiled child » in English. “While growing up, there’s a moment one becomes aware of having his own sense of style, to fit in or rebel oneself from the norm. I wanted to express these transition phases in my collection.  ”

“The silhouette is quite graphic, I used a lot of pleats techniques and pattern blocking. There are also 5 kind of different brocades all made in Japan. I also did thread embroideries and cutouts for clothes and shoes. The prints have some childish references such as toys, school paper, multicolor ink stains and a lot of silver spoons. The proportions, the soft shoulders on the jacket and the sporty details on the clothes have been influence by street wear.” 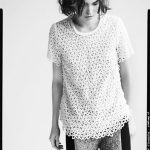 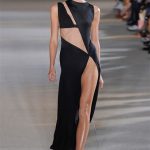