Iconoclastic duet if any, Fabrice Lorrain and Vava Dudu, claim as influence all creators or no one, and advocate total freedom towards the orthodoxy of fashion.

Born in 1970, Vava Dudu, after a preparation for Fine arts, entered the atelier Fleury-Delaporte. After experiences with creators as varied as Elisabeth de Senneville, Corinne Cobson and Jean-Paul Gaultier, for whom she designed corsets, she created in her own name a collection of accessories in ancient beads (1997-98).

Fabrice Lorrain, born in 1971, started after a literary baccalaureat with art as an option, architectral studies before entering between 1993 and 1996 a workshop of textile design where he worked on prints and knitwear. In 1995 and 1996, he started his collection of “cotte de maille” in inox and bronze.

When they met in 1998 on a sale festival they discovered they had the same conception of the reappropriation of the garments in the theme of trash fashion.

Their style was constructed through performances, in 1999 in Montreal with « Human Body Electronique », then in 2000 in Pineal Eye in London (“Fashion Crucifixion”) as well as in the Beauty by et vous show. Their work was awarded in 2001 by ANDAM.

Their goal is the refusal of conventional costume, of brand and logos, as testifies the famous Buberry tartan reappropriated by scratches, carving and tortures. Indeed, instead of adding “fashion to fashion”, Vava Dudu and Fabrice Lorrain would rather activate new energies by customizing already existing clothes, inscribing a message in order to differentiate them, destroying to construct all over again.

Vava Dudu and Fabrice Lorrain thus make arise, on their creations, all the signs of ageing and time passing by. 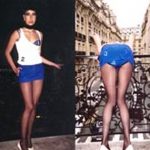 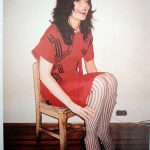