Born in Paris in 1984, Antonin Tron studied fashion design at the Royal Academy of Fine Arts in Antwerp and apprenticed with Raf Simons. Upon graduation in 2008, Tron returned to Paris and joined the studios of Louis Vuitton, Givenchy and Balenciaga, before establishing ATLEIN in March 2016. ATLEIN is the 2016 recipient of the ANDAM Prix Des Premieres Collection. Connoting the power of the Atlantic ocean, ATLEIN was created as a site for independent research with a humanist spirit. Attentive to form and physicality, Antonin’s work is focused on the body, its tension, energy and movement. 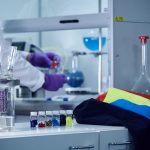